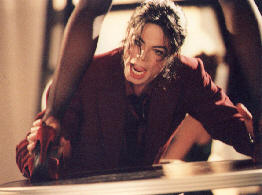 He is not just king of pop. He is king of music! Everybody knows him but I want to give a part about him for my web site. Because I am one of the biggest fans of MJ in the world. I like Michael Jackson very much. I listen to him since 1987. My parents said that I liked and was afraid of Thriller when I was two years old, but I don’t remember it.

There are millons of MJ fans. He is the most selling artist of all time!

Elizabeth Taylor says: “What is a genius? What is a living legend? What is a megastar? Michael Jackson-that’s all.” about him. Michael Jackson is indeed, an international favourite for all ages, an incredible force of incredible energy. In the art of music, he is a pacesetter for quality of production, in the wanguard for high standards of entertainment. His dance is the perfect dance. He is the most selling artist of all time. Also he has got a very good personality.

Let’s give a short biography of him He was born in 29 August 1958. In 1978, he acted in a movie named “The Wiz” (with Diana Ross) for the first time. Jacksons’ first number one hit was “I want you back”. The legend music video Thriller’s story was published in “The making of Thriller” video. In 1983 he started to work with Pepsi until 1993. He composed “USA for Africa – We are the world” with Lionel Richie in 1985. The singers who sang this song were Lionel Richie, Stevie Wonder, Paul Simon, Kenny Rogers, James Ingram, Tina Turner, Billy Joel, Michael Jackson, Diana Ross, Dionne Warwick, Willie Nelson, Al Jarreau, Bruce Springsteen, Kenny Loggins, Steve Perry, Daryl Hall, Huey Lewis, Cindy Lauper, Kim Carnes, Bob Dylan and Ray Charles. Many people are a fanatic of him. Is Michael Jackson a fan of anybody, too? Of course, she is Elizabeth Taylor!

In 1994 he married with Elvis Presley’s daughter Lisa Marie Presley. In 1996 he married with Deborah Rowe. His son is Prince and his daughter is Paris Katherina. His other family members are Joseph, Katherina, Maureen, Sigmud (Jackie),Toriano (Tito), Jermaine, La Toya, Marlon, Randy and a mega star Janet Jackson!

He made a duet with Janet called “Scream”. Also he sang with Paul McCartney, Mick Jagger, Diana Ross, Siedah Garrett, Stevie Wonder, Eddie Murphy, 3T, Brandy and Mystery Girl. Also he singed with the queen of pop Madonna but we couldn’t listen to that song. L

Jacksons’ and The Jackson 5’s fortunes declined somewhat after the early ’70s and the group moved to Epic at middecade, with Michael temporarily abandoning his solo career and subsuming his group leadership to other members of what was now called The Jacksons. They were called The Jacksons after they moved to Sony Music, because Motown didn’t let them to use their original name. His first solo album “Off The Wall” was published in 1979. His first solo single was “Rock with you”! Jackson again recorded and toured with his brothers but his second album “Thriller”(1982) became a musical phenomenon. It is the biggest selling album of the century. It seems in 21st century, nobody will be able to transcend “Thriller”, too. Thriller music video is still the best and most famous music video. Michael became a real mega star after “Thriller”. His follow-up album “Bad”(1987) accompanied by a solo world tour. The new face of Michael Jackson shocked people, because he became white. In 1988, Michael acted in “Moonwalker”. Also he had a book named “Moonwalker”. In late 1991 he returned with “Dangerous”. Michael’s music was not only pop and soul. He was doing rock,too. Everybody started to call him “King of Pop”. Somebody started to be jealous to him and they slandered. His fans and friends didn’t let him to be alone. In 20 June 1995 “HIStory” came. HIStory contained one disc of new material and one disc of Michael’s greatest hits (HIStory: Past, Present and Future Book 1).

In 1999, he gave two concerts named “Michael and His Friends”.

In 2001 he returned with his 5th solo studio album “Invincible”… First single “You Rock My World” which he published before the album was one of the biggest hits of 2001. Everybody liked “Invincible”. In 09-10 September 2001, he celebrated his “30th Anniversary Celebration” with his friends Britney Spears, Samuel L. Jackson, Mya, Usher, Whitney Houston, Billy Gillman, Shaggy, Rickrock, Deborah Cox, Rah Digga, Monica, Marc Anthony, Destiny’s Child, Liza Minelli, James Ingram, Gloria Estefan, 98 Degrees, Luther Vandross, Elizabeth Taylor, The Jackson 5, Chris Tucker, Slash, the like and of course, his lucky fans. One day after, when he was still in New York, terrorists attacked New York. So he and other famous people helped affected people by giving a concert named “United We Stand: What More Can I Give?” in 21 October 2001.

On 18.11.2003, he released “Number Ones”. This album included a new single named “One More Chance”. The same day, some bad people started to do same things like 17.08.1993 events. Jackson sent a message to his fans. The claims are continuing. However, we knew he was innocent. In 2004, Sony Music published “The Ultimate Collection” box-set which included 4 audio CD’s and 1 DVD of his 1992 Bucuresti concert. This box-set album was a gift to MJ Fans, because it included unreleased, rare and new songs.