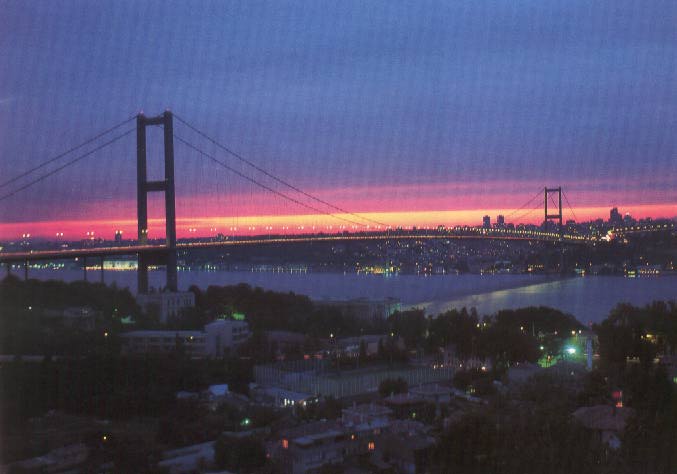 Turkey is a beautiful country with a rich culture. It is between Europe and Asia. I mean it is a bridge between Asia and Europe. When you arrive the end of the bridge named Boğaz, you can see the letter:”Welcome to Asia” or “Welcome to Europe”. Also it is near Africa. People call it “bridge Asia to Europe” for this reason. There are sandy beaches, bridges, 4 seas, historical places, interesting places, every religions’ temples, kindy people, discos, etc. Every year many tourists visit there. They enjoy their holiday at Turkey.
There are different people. You can’t just say “Turks have got black hair” or “Turks are white”… Because, I said it before, they are different from each other. But most of Turkish people have got brown hair,brown eyes. “Turkish people are very kind and hand-some/beautiful” say tourists who visited Turkey.
Most people live in apartments in Turkey. Most of Turks stay in Istanbul. Men do different jobs. Once open a time,women in Turkey were just a house-wife. But now,they are successful in different jobs. Women Rights were first given to Turkish women in the world by Atatürk.
Turkish food is very delicious. Maybe,the most delicious food is Turkish food. For example;dürüm, kebab, shish, döner, içli köfte (meat inside),etc. Tourists of Turkey say “Turkish food is great. I didn’t eat any food like Turkish food before”.
Turks do many festivals like Sweet Bairam,Republic Day,Christmas,Victim Bairam, Children’s Day, Young People’s and Sports Day, Victory Day,etc. There are many holidays,too. “My favorite holiday is the Summer Holiday because it is longer than other holidays” says Turgay Suat Tarcan. Turkey is a country,you know. Turkey’s Turkish meaning is Türkiye. Many people think that Turkey comes from the turkey animal,but it doesn’t. Because Turkey comes from Türkiye and Türkiye comes from Turkish people. The animal’s Turkish meaning is “hindi”. Does “hindi” look like Türkiye?
Turkish countries are very old in the history like China. The first Turkish country was Hun which we know. Then Turkish people established Skyturkish (Göktürk) country. It was the first country which called Turkish. I won’t tell about other Turkish countries because there are many Turkish countries in the history.
Turkish people are nomads,so they did many wars but they are peace-loving people.Mustafa Kemal Atatürk,who saved Turkish people from enemies,says: “Peace in country,peace in the world”.Mustafa Kemal Atatürk was a very special man.I will try to write about him at my web site.

Turkey is a tourism country. It has got four beautiful seas and many tourists come to Turkey every year. All of them says:”Turkey is a beautiful country. People are hospitable. Turkish meal is the most delightful meal in the world”…
Turkey is free religion’s country. Many women in Turkey are not wearing turban or head wrap. Because everybody can wear what they want. Anyway, Islam’s rule is not turban. You can hear mosque’s “call to prayer” and church’s bells.Many people are muslim but everybody can choose their own religion. Some people tries to hinder it but they can’t do it because Atatürk made laws for it.
Turkey is a history country. There are many museums, churchs, mosques, palaces, ruins and so on. Santa Claus and Mother Mary lived in Anatolia which is in Turkey . If you want to learn other interesting things, come to Turkey! Don’t forget your camera.
Turkey is a wonderful country. Its faswcinating sights, rich cultural history and warm-hearted people make it unique.
© 1999-2001 TST Interactive Company