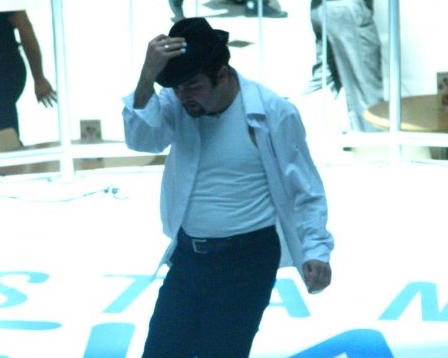 TST MEGAMIX 1: This is a Michael Jackson video. However, there is not Michael Jackson in the video. There is TST who is a MJ Fan in the video. And TST is me. 🙂 This is megamix of Rock With You, Remember The Time, Don’t Stop ‘Til You Get Enough, Billie Jean, Wanna Be Startin’ Somethin’, Black Or White… This video was my first video which I put to YouTube in 17 December 2005. However my “Turgay” account is suspended by this site even the videos belonged to me. I have to put this video, because it is very important. This video is chosen as one of the best 55 internet videos of the year by Turkish Billboard magazine in January 2007. YouTube.Com visitors watched my videos 464656 times since 17 December 2005 to Sat Dec 30, 2006 6:03 pm. I make my own videos. I don’t know the reason why they deleted my “Turgay”, “TurgayTST” and “SFMJFan” accounts. Anyway, you have to watch this video, because it became very successful… For example, 1255 people watched this video at DailyMotion between 26-03-2008 and 08-04-2013. I don’t know when YouTube will delete my “TSTJackson” channel. My “TSTJackson” channel is still active and 2,621,853 people watched my videos at my “TSTJackson” channel between 18.03.2007 and 08.04.2013. But if they wouldn’t delete my other channels, the quantity would be much more. For example, I remember that more than 3 million people visited my “TurgayTST” channel. Maybe much more…

TST MEGAMIX 2: The Way You Make Me Feel, Scream, Beat It, 2 Bad, Blood On The Dance Floor, Come Together, Dirty Diana Remix, Earth Song, Heartbreaker, Dangerous, Smooth Criminal, Streetwalker, They Don’t Care About Us, Threatened, Unbreakable, You Are Not Alone, You Rock My World, Superfly Sister… These videos were the ones which couldn’t enter my first megamix known as “MJ Megaremix (TST Megamix 1)”… So I made a second megamix in 2006 with sample from The Prodigy’s “The Way It Is”… Now it is 2013 and I have 7 megamixes. Oops, for the 8th one, I have to make new videos. 😀 Don’t worry. I’ll make them. 955 people watched this video at DailyMotion between 26-03-2008 and 30-06-2013.

TST MEGAMIX 3: In 2005, I made “TST Megamix 1 (MJ Megaremix)”, it was watched by thousands of people and it was chosen one of the best YouTube videos of 2006 by Billboard Magazine. In 2006, I made “TST Megamix 2” and I danced in front of the video in Carousel Shopping Center and hundreds of people watched my “TST Megamix 2 Show” live. These videos were one of the biggest reasons of a web site chose me “fan of December 2006 in the world”. Now it is 2009 and the third part of “TST Megamix” has just finished. This time I made an intro by using Tugce San’s “Devam… Devam…” intro…
Anyway, the songs which are in this megamix are: She’s Out Of My Life, Burn This Disco Out, The Girl Is Mine, Say Say Say, Man In The Mirror, Bad, Give In To Me, Who Is It, In The Closet, Can’t Let Her Get Away, Why You Wanna Trip On Me, D.S., Tony Moran’s HIStory Lesson, Is It Scary, The Lost Children, Privacy, 2000 Watts and Xscape… 312 people watched this video at DailyMotion between 07-04-2009 and 30-06-2013.

TST MEGAMIX 4: Gone Too Soon, Little Susie, Someone In The Dark, Music And Me, Why, Dear Michael, You Are My Life, Break Of Dawn, This Is It, Childhood, Smile, I Just Can’t Stop Loving You, On The Line, Liberian Girl, Fall Again, Morphine, Ghosts, Jam, Tabloid Junkie, P.Y.T., Shake Your Body Down To The Ground, Blame It On The Boogie, Santa Claus Is Coming to Town, Up on the Housetop and Whatever Happens… Since TST Megamix 3, I’ve made these videos… In first 3 megamixes, Michael Jackson was living. So most of the songs were energic. However, since Michael Jackson’s death, I’ve made videos for most slow songs. So this megamix’s second name was called “Ballad Mix”, but after “Morphine”s slow part, the megamix turns into songs with tempo. These videos are made in one year (between August 2009 and August 2010). Unfortunately, “TST Megamix 4” is the first megamix which was made after the King Of Pop’s death. I dedicate this megamix to Michael Jackson, Little Susie, my budgie love bird Fıstık who died in 2010, Charlie Chaplin which I impersonatared him in “Smile” and all the good people who have gone too soon. A Turkish proverb says: “Every death is soon”. 520 people watched this video at DailyMotion between 07-09-2010 and 07-07-2013.

TST MEGAMIX 5: Hollywood Tonight, Can You Feel It, Dancing Machine, Serious Effect, ABC, Behind The Mask, I Want You Back, Speed Demon, The Love You Save, Frosty The Snowman, Rockin’ Robin, Human Nature, I’ll Be There, Farewell My Summer Love, Keep The Faith, One Day In Your Life, Ben and Speechless… I made amateur music videos to these 18 songs since TST Megamix 4 which was made in 2010. Of course, I made also videos to remixes of Black Or White, Dangerous, HIStory and You Rock My World but I didn’t use these songs in this “TST Megamix 5”, because they were already in my previous megamix videos. In the official Behind The Mask video, they used my video, too. You can watch the full versions at http://www.tst.gen.tr/tstmegamix.htm . In the intro, I used a sample from Yonca Evcimik’s “Kendine Gel” song which was famous in 90s. 305 people watched this video at DailyMotion between 24-07-2011 and 07-07-2013.

TST MEGAMIX 7: Scared Of The Moon, Eaten Alive, Somebody’s Watching Me, Monster, I’m So Blue, Money, Leave Me Alone, She Drives Me Wild, State Of Shock, This Time Around, Heartbreak Hotel (This Place Hotel), Off The Wall, Girlfriend, I Saw Mommy Kissing Santa Claus, Butterflies, The Lady In My Life, Keep Your Head Up, Someone Put Your Hand Out, The Way You Love Me, We Are The World (USA For Africa) and Beautiful Girl… After “TST Megamix 6” which I’ve done in 2012, I’ve made my own personal music videos to these 21 songs of Michael Jackson… The video starts with Dangerous’ intro, because my full length impersonatar videos started with it in 02.04.1996. However my first megamix video was recorded in 31.03.1996. Now it is 2013 and it is time for “TST Megamix Part 7″… You will be able to watch small parts from these 21 videos but if you want to watch the full versions of the clips, please go to vimeo.com/tst … You will also see my latest photos with celebrities like Miss R.D.C. France 2012, Şenol İpek, Fernando Alonso, Elvan Abeylegesse, Redfoo from LMFAO, Cristiano Ronaldo, Gökhan Tepe, Haldun Dormen, Immortal’s dancers, Iker Casillas, Sabri Sarıoğlu and the queen of Turkish rock Şebnem Ferah!

And if you click on the image below, you will be able to watch the new ones. Because now, I don’t use YouTube and DailyMotion for the new videos, anymore. The reason is they delete my videos or even my memberships. Today is 07.07.2013. Since 23-03-2008, 130.831 people watched my videos which is at my DailyMotion membership TurgayTST. Also since 22-11-2008, 93.251 people watched the videos which is at my DailyMotion membership SFMJFan. Since 18-03-2007, 2.663.606 people watched my videos at my YouTube channel TSTJackson… Also I have 491 subscribers to my YouTube channel which is active today (I mean in 07.07.2013)… I don’t know the date that you are reading my sentences but I don’t know if YouTube will delete my TSTJackson channel or not, either. They deleted my 3 channels called SFMJFan, Turgay and TurgayTST and my videos’ viewing statictics were much more than these numbers. Millions of people watched my videos at my old YouTube channels which were deleted. For example, more than 3 million people watched my videos which are at just my TurgayTST account. Maybe 4 or 5 million, I can’t remember. Maybe when you are reading my information, my TSTJackson channel is still active and the viewing statictics are much more bigger than the numbers I gave to you. Anyway, I chose Vimeo now, because they never delete my videos. All of the videos are created by myself, why do they delete it? I don’t understand. People shares official videos. I don’t share official videos, I share my own videos but YouTube and DailyMotion don’t delete their videos, they delete mine. It is not fair. I hope Vimeo will never be like YouTube or DailyMotion. I don’t want to upload all of my videos to another social video sharing web site again. Anyway, here are the new ones: However, I liked the mosaic, puzzle or jukebox which is made by DailyMotion. But I had to delete it. However, you must remember that I don’t share my new videos at DailyMotion, anymore.