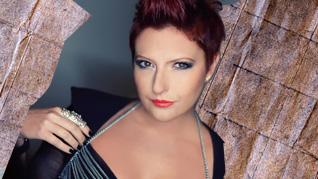 I first met her with her first music video “Ölüm Kapımı Çalmasa da-Even death doesn’t ring my door”. In fact I had heard her voice in the famous Turkish Rock Band Kargo’s song “Sevda Sözleri-Love Words” before and thought “What a beautiful voice”. Then her second video came, I’m interested, so I bought her album. I became a fan of her because all of her son gs were perfect.
In Turkey, there used to be just two successful female rockers: Şebnem Ferah and Özlem Tekin. But then Aslı Gökyokuş succeed in rock, too and became one of the best Turkish Rockers in Turkey. Now I look at my hundreds of cassette&CD archive… One of the singers which I listen to most is Aslı…

Aslı also cares her fans. For example she replies my e-mails. She has visited this web site. I and Aslı send mails each other but we talk in her web site’s forum most.
I hadn’t known very much about her until I visited www.asligokyokus.com … So I translate her biography which is at her web site into English…
Aslı was born in İstanbul (26.10.1977). Her schools were Kartal Eczacıbaşı İlkokulu and Özel Ortadoğu Lisesi. She is still studying American Culture and Literature in İstanbul University. She started music with her first group when she was at secondary school. She gave some concerts with this band named Phoenix. After high school some members left this band and the band’s name changed as Mary Jane. They started to do cover music in bars (example: Beyoğlu Guitar Bar and Kemancı Bar). Then she did vocal to the famous male rockers Haluk Levent and Teoman. She signed with Sony Music Turkey with Serkan Çeliköz’ and Selim Öztürk’s (they are from Kargo) supports. She composed songs with Serkan and Selim during a year. She made her first album “Neresindeyim?-Where am I?” after 3,5 month studio work.
Aslı’s star sign is scorpion. She likes going to the cinema. She is a fan of Brad Pitt and her favorite movie is “Fight Club”. She also likes Robert De Niro, Woody Harrelson, Nicholas Cage, Edward Norton, Susan Sarandon, Meg Ryan and Gwyneth Paltrow. But she hates karete movies 🙂 Her favorite place is Roxy. She was a member of athletism team in secondary school. She likes windsurfing and snowboard. Her favorite music stars are Bon Jovi, Poison, White Lion, White Snake, Fire House, Skid Row, Garbage, Tori Amos, Skunk Anansie, Creed and U2.

After a long period of work, she published her second album “Su Gibi/Like Water” in 2004.