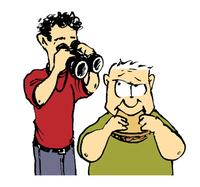 OBSERVATION METHOD
Traffic has always been a major problem in the world. Especially in Turkey… So traffic can be an important research subject. For example, the subject of the research which I will talk about is the presence of other drivers as a determinant of traffic violations which is written by Yoel Yinan, the department of physchology at Bar-llan University.
In order to prepare the report first of all they should form the theory. Driving a car can be dangerous especially if the driver is careless or obsent-minded. For this reason a considerable number of studies have been focused on the various factors that affect driving. Using this datas, they form three teories about this subject. Thus, they examined the effect of presence of other drivers on individual driving performance. So, as a second step, they hypothesized that the more intense the attentional conflict caused by presence of the other drivers was the more likely the target drivers would be enter the intersection before the traffic light turned green. First of all they selected the variables related to the theory. In this research method they selected the experimental study to find causal relationship between independent and dependent variables. And they used field experiment. The independent variables were type of other driver presence, target drivers gender and time of observation. Their second goal was to determine whether female drivers under various conditions, would violate traffic laws more or less often than male drivers would. So in order to collect the datas; what method do they use? ……… No idea?

Yeah, you’ve got it! They use observation method! There are two observation methods: Natural Observation Method and Participative Observation Method. Researcher observes a situation in observation method. In this research, they observed nine hundred sixty drivers as a sample and half of them were women. Then the next step, data collection is made. They observed drivers in different places, at different times during the day and different situations. For the statistical analysis of data which is the next step, they use İnferential Statistics. Because only nine hundred people were observed. The research they prepared is general and the sample is not sufficient. So sample results must be generalized to the related population. After the analysis they stated the certain results which are lead by the statistical analysis. In order to show the analysis, they add up tables on the report. Because of latter factor was insignificant they concern the two other independent variables. And finally they found out that there were no interactions among the independent variables.
Their findings indicate that the presence of other drivers caused on increase in the frequency of traffic violations. The difference in the frequencies of traffic violations among the various conditions suggests that each type of others present condition created a different gradation of pressure that was experienced by target drivers. The main affect of gender indicated that female drivers were somewhat less affected by the presence of other drivers than male drivers were. For the last step of report is the report writing. In this repport, they wrote the abstract, title, introduction, the methods, the results and conclusion. They gave the references used in the study as an bibliography. They wrote the citiations and also add up the figrures and tables to the report.
That’s all I have to talk about. Thanks for listening me.


Screens are our own lives