The New Legal Status of Women in Turkey 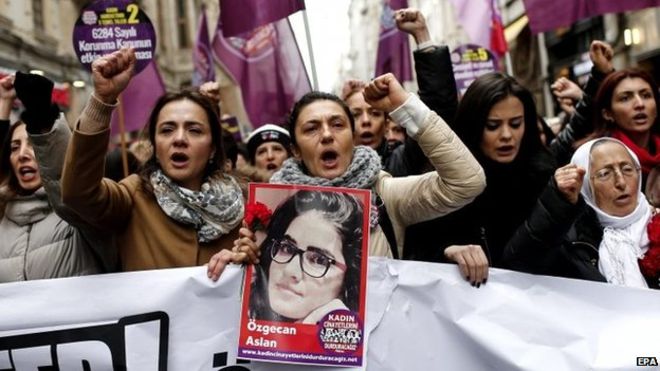 The new Turkish Civil Code, which abolishes the supremacy of men in marriage in the family, was approved by the Turkish Parliament on November 22, 2001. Article 41 states that: “The family is the foundation of Turkish society and is based on equality between spouses.”
In the legal domain, the first effort to reform the Turkish Civil Code of 1926 to the advantage of women took place in 1951.
The rise of a new strong feminist movement after the 1980s and its success in the revision or annulment of certain articles of the Civil Code, as well as its advocacy and lobbying on several issues of women’s human rights, played a key role in the final enactment of the reform and its acceptance by society.
The new Civil Code has taken a new approach to the family and to women’s role in the family.
The new approach to the family is reflected in several changes:

The equality of spouses within marriage is anchored in the Turkish Constitution through an amendment of Article 41 enacted in 2001.
A woman is free to choose either to retain and use her surname in front of her husband’s surname on marriage, or to take her husband’s surname (Article 187 of the Civil Code).
After the women’s movement’s success in gaining the 1990 repeal of the article obliging women to obtain permission from their husbands to work outside their homes, no replacement law was passed until the new Civil Code.
A married women may travel abroad whenever she wants. All she needs is her passport.

Both Turkish and foreign women are given a choice where simple notification to the authorities and the presentation of relevant documents will entitle them to acquire the citizenship of their husbands (Article 5, 19 and 42 of the Turkish Citizenship Act).
A Turkish woman who marries a foreigner does not automatically lose her Turkish citizenship. She has three alternatives as far as citizenship is concerned.

In Turkey there are no official laws obliging couples to marry. However, there is no legislation defining or governing de facto relationships either. Hence, a de facto relationship does not confer upon the woman any rights to alimony, inheritence, etc.
According to Article 337 of the Turkish Civil Code, the custody of these children belongs to the mother. If she is the one looking after the children, the mother, according to Article 329, has the right to claim alimony in the name of the children.

A married woman may choose to live apart from her husband. According to Article 197 of the Civil Code, “Either of the spouses has the right to live apart from the other as long as living together seriously endangers his or her personality and economic security or family harmony.”
A woman can apply to the court for a legal separation from her husband (Article 170 of the Civil Code).

RIGHTS OF WOMEN DESERTED BY THEIR HUSBANDS

The main issue here is whether the woman deserted by her husband does, or does not, want a divorce. Article 164 of the Civil Code states that desertion is considered to be one of the valid grounds for divorce. A woman has the right to file a case for divorce if her husband has deserted her in order to avoid his matrimonial obligations or has failed to return to the family home without rightful reason.

According to the Civil Code, either one of the spouses can file for divorce if the other has:

–> Committed adultery (Article 161)
–> Plotted against his or her life, has treated him or her very badly or in a way which is severely detrimental to his or her honor (Article 162)
–> Committed a humiliating crime or leads a dishonorable life, so that the plaintiff cannot be expected to live together with the defendant (Article 163)
–> Deserted the family home (Article 164)

Until January 2002, women’s right to work was governed only by the Constitution, which stated: “Everyone has the right and duty to work.” In the new Civil Code it is explicitly stated: “Neither of the spouses is obliged to seek permission from the other regarding the choice of work or profession” (Article 192).
There are also specific laws listing the places where women cannot work. Women cannot be employed to work underground or underwater, in some arduous and dangerous jobs and night shifts.
Legislation covering political rights and freedoms, the right to vote, be elected and engage in political activity does not differentiate between sexes but applies to all citizens, men and women.
An obstacle to women was the ban on establishing women’s branches or youth branches in political parties. Law No. 4445, passed in 1999, has removed this obstacle.
Anyone who performs sterilization on a man or woman without his or her consent is sentenced to imprisonment (Article 471 of the Penal Code).
After the first ten weeks of pregnancy, abortion is only permitted to save the life or preserve the health of the woman or in the case of fetal impairment.
If a woman and her husband are covered by the national social security system, the social security institution meets the woman’s hospital and abortion expenses.
A woman assaulted by her husband may file a case for divorce, compensation or legal separation at the Court of First Instance, in addition to applying for a protection order or bringing a separate criminal lawsuit against him.
The accused spouse can be ordered:

Of course, these aren’t the only woman rights in Turkey. For example, there are imprisonments for three months to one year for verbal abuse of women or men and for six months to two years for the physical abuse of women or men. However, we haven’t got enough time to count all of other women rights in Turkey. These were just examples. Don’t forget these rights. Thank you for listening to me.