Who is the most famus explorer in your country? 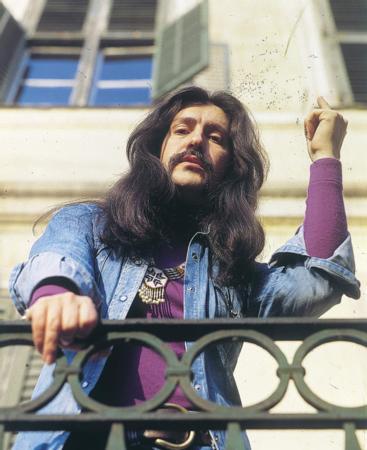 If somebody asked who the most famous explorer is in my country, I would answer it “Evliya Çelebi”… However, everyone would say “Evliya Çelebi”… So I want to intorduce you the modern explorer Barış Manço… Who is he? Everybody in Turkey loves him. Also some other countries love him. For example Japan… Barış did many concerts there and Japanese people recorded them as “Barış Manço live in Japan”. Also he did album for Holland (1982-Discomancho) and for Germany (1976). However, the reason that I called him explorer, isn’t just his albums or concerts. He went all countries in the world. He was modern explorer. He introduced world using TV.
He was born in 2.1.1943 in Moda (Istanbul) and died in 1.2.1999 in Moda. He couldn’t do without music. He established his first band (Kafadar) when he was 15. His second band was Harmonies and third was Kaygısızlar (including a very important Turkish band Mazhar Fuat Özkan). Also he worked with Moğollar. His last band “Kurtalan Express” played with him until he died. He did 33 single 1962 to 1984 but now Turkish music shops don’t sell them because music firms don’t publish any old singles. His albums are very popular:

Mançoloji was his greatest hits and last album. When he was recording it, he died. So he couldn’t see this album. When he died, everybody in Turkey cried and they became sad. Many people went to his house to pray and to write some thing on his memory notebook. Many people went to funeral procession. I went there, too. Everybody couldn’t walk because of crowd. Nobody could talk normally. We couldn’t believe.

His TV program “7’den 77’ye” (7 to 77) is a very impotant show. This program has got three parts. I told about “Dönence”… “Adam olacak çocuk” (The kid will be human being) is a part which Barış Manço talks with children. He was asking questions like “Do you drink milk, what do you want to be, etc.” and he educated children using funs. His wife Lale Manço says: “If Barış Manço lived, he wouldn’t make earthquake’s poor people to be alone, especially children.”… We are sure! Also he talked with old people in his other program. Also he did a program named “Doludizgin”. His music was usually rock. His hair was long. He didn’t cut them one time until he died. He always attached big rings on his fingers. His songs are perfect like him. I can’t tell about his songs. He always composed different songs. All of them are very very beautiful. He had got one photonovel which name was “Küheylan”. Also he has got one film: “Dad, let us marry”(Baba bizi eversene) His name’s meaning is peace. They say that he was the first man who called Barış. His family (Rikkat-Ismail) called him peace, because they wanted the finishing of Second World War. This is thing which was done right because he worked for peace. He wanted to be the president of the republic but he died because of heart crisis. First he married in 1967 with a model called Maria Claude for three months. Then he married with Lale (Tulip) in 19.7.1978. He has got two sons called Dogukan and Batikan (Eastblood and Westblood). His first music video was shown in 1973. His first TV program was shown in 1988. He has got many cars because of his car collection. Also he was doing antique vase collection. He had got a house in Belgium. His brother is Savaş and his sister is Inci (Pearl). He finished university in Belgium. His singer personality is like Elvis Presley or Michael Jackson in Turkey.

However, as I said before, he wasn’t just a singer. He was also a modern explorer. Evliya Çelebi introduced the world with writing his memories. However, Barış Manço was living in 20th century, so he had a chance to show his journeys on TV. We had learned everything from him. For example, who knew Equator’s magic before his programme? Let me remind it… If you leave a stick in washbasin, it will repass to different directions in north and south. Manço learned this and taught it to us. Where did you learn the place where the sun always shines on… Of course, from Barış Manço’s TV programme: “Dönence”… We made breakfast with gorillas, we had journey in Egypt deserts with him. He walked on pole seas, than we became surpried.
Barış Manço and his team went to more than 100 different places of 5 continents and they made 600.000 road km. His last “Dönence” programme was shown in December 1998. It was his 378. programme. This was a record of Turkish television history. He had said “I will make this programme until I die”… Maybe, ATV elevated this programme because of ratings, but he died after 2 months. He has got many awards from other countries.
The thing which he made wasn’t that programmes. He didn’t just introduce the world to us. He also introduced our country to the world. He had meetings with important people of other countries. This means he was a culture envoy and a modern explorer…

Screens are our own lives