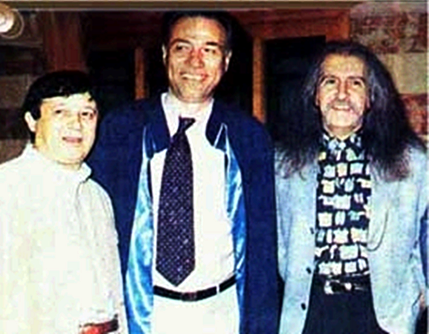 King of Turkish Music Baris Manco died in 1 February 1999. Everybody was shocked. One year later, people still weren’t believing it. Boyut Books made a book and a CD-Rom about Baris Manco one year later. The collection was just for Baris Manco’s first dying anniversary. I mean this collection is a special collection. I bought it, too. Because I am a very big fan of him. Anyway, everybody loves him. Now I will try to tell about this CD-Rom and the book.
This collection looks like an encylopedia but there is a real CD on the book’s cover. The CD brings a documentary VCD about Baris Manco and his 11 music videos: 1)Kol Dugmeleri – Arm Buttons
2)Daglar Daglar – Mountains, mountains
3)Domates, Biber, Patlican – Tomato, Pepper, Aubergine
4)Kezban – Kezban
5)Nane Limon Kabugu – Mint Lemon Bark
6)Musaadenizle Cocuklar – Let me,kids
7)Ayi – Bear
8)Donence – Tropic/Backing
9)Kalpler Beraber – Hearts are together
10)Benden Ote, Benden Ziyade – The father side from me, More than me
11)Gulpembe – Pink Rose
I think these music videos aren’t enough, because his other music videos are good, too. I hope somebody will make a collection CD-Rom for all of Baris Manco’s music videos.
The book’s name is “81300 Moda”. Why? Because it was Baris Manco’s home address. He used to finish all of his programs by saying: “You can write about all but all things to me. You know my address:
BARIS MANCO
Moda 81300/Istanbul”
…
The book brings his photos, his special objects’ pictures (like cars, ties, antiques, rings, guitars, clothes, rewards, house…), journalists’ articles about Baris Manco, fan messages to him, fan art works, his TV programs’ photos, etc.
I learned a new thing about Baris Manco here. I thought his full name was Baris Manco, now I know that his full name was “Mehmet Baris Manco”.
Baris Manco was a very special human for people. We miss him.