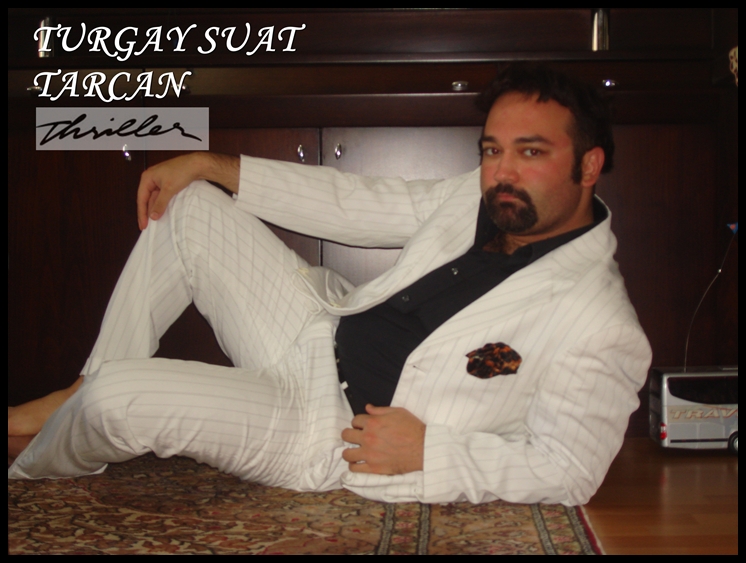 1- WANNA BE STARTIN’ SOMETHIN’: One day, I put part 1 of my dance life summary to YouTube with the music of Michael Jackson’s “Superfly Sister”… Now, you’ll watch part 2 of my dance life summary; I mean my music videos’ summary which you can watch my dancings and different images in the same video. This video which is called “Wanna Be Startin’ Somethin’ Remix” is between 1993 and 2004 like “Superfly Sister”. I made this montage in 2004, too. However, this time you’ll watch really different images of mine. In “Superfly Sister”, most of screens are belong to my junior high school days. This time, I mean in “WBSS Remix”, most of the screens are belong to my university days.
I dress my own clothes. You’ll even see me in my pyjamas in this video. 😀 I like changing man in the mirror. In my life, I made my hair long, I shaved all of my hair, I made myself bearded, etc. Most of people are surprised when they watch this video or look at my photo albums and they say “Oh, I can’t believe all of them is you”… Of course, the only person who changed man in the mirror isn’t just me. Life also changed me; for example life made my hair infrequent. Life gave me navel and made me put on weight, etc. However, one thing didn’t change; my soul. I still love dancing, especially with Michael Jackson’s songs. In fact, I also dance with Madonna, Tarkan, Jennifer Lopez, Paul Johnson, Sertab Erener, Ozlem Tekin’s songs in some of screens of this video. However, I didn’t use their music when I was making the montage of this video. I used my idol Michael Jackson’s music again, because I think his music is more applicable for my dance, even I have also my own style. Anyway, in fact in the screens, I don’t dance just with Michael Jackson’s song. 914 people watched this video at DailyMotion between 13-07-2008 and 30-06-2013.

3- THE GIRL IS MINE: 5 years ago, I danced with the new version of “The Girl is mine”. This Michael Jackson remix is made by Will.I.Am for the most selling album of all time Thriller’s 25th year special deluxe edition. A 2008 track, 2008 version TST… You can hear the original version of the song in the beginning of the video with 1996 model TST, but I prefer new remix of this song. It is interesting. I think the other 2008 remixes’ old original versions are better than the new ones but I liked “The Girl Is Mine 2008” more than “The Girl Is Mine 1982″… 370 people watched this video at DailyMotion between 16-06-2008 and 30-06-2013.

4- THRILLER: PART 1: Go to michaeljackson.com to see yourself as Michael Jackson in the Thriller video! This is my version…
PART 2: In 1996, I made a MJ megemix with a cassette and danced with the megamix. This megamix included “Thriller”s chorus.
In 2002, I recorded my dance with a part of a remix of “Thriller”. The part of the remix which I danced in front of my camera, included just verses.
In 2004 Istanbul University’s Cinema&Television department called me and my friends to dance with Thriller. However, this short movie which was called “Sohret: Sonsuza Dek Yasayacagim” (Fame: I will live forever) included just dance part of “Thriller”. My friend Halil was Michael Jackson, I was representing new generation (hip-hop fan) and another friend Burak was representing classical generation (business-man) in that short movie.
In 2005, it was time to combine these videos. However, a short part of combination was still absent and I danced in the very little part of the song. At last, it became 1996-2002-2004-2005 combination and I’ve had a video of full album version of “Thriller”. This video also includes “Making Of 2004 dance part of Thriller”. Camera is by one of Istanbul University’s directors Ebru and of course, me. (I put camera on somewhere when I make videos in my house) There are also two Michael Jacksons. In singing part, I am Michael Jackson and in group dance part, my friend Halil (who wears Scream mask) is Michael Jackson.
Now, it’s 2006. It’s time to share my “Thriller” video with YouTube users. Have fun!
PART 3: In 23.02.2006, there was Michael Jackson Karaoke party in Istanbul. I singed “Thriller” in that party. My friend Engin recorded my performance. 3342 people watched this video at DailyMotion between 14-07-2008 and 30-06-2013.

5- BEAT IT: Hi, everybody! I’m back! I’ve got 2 accounts; one is “Turgay” and one is “SFMJFan”… I make videos since 1996 and I put these videos to YouTube since this site started. I was in the army for months. That’s why I couldn’t be online and create new videos. Don’t worry, my friends. I don’t care about a few enemies and their words. I’m back and I’m going to dance again and again. I have fun when I’m dancing. I missed making videos. Today, I started to record videos with “Beat It”… I know, I’m not Michael Jackson. That’s why I didn’t wear like Michael Jackson. In any case, unfortunately, I don’t have his red jacket. So I wore like one of his dancers. My dance isn’t perfect like MJ, but I trust in my dance. Have fun! (Introduction is written in 2006 and this video is watched 1991 times at DailyMotion between 13-07-2008 and 23-06-2013)

6- BILLIE JEAN: Everyone copies Michael Jackson’s movements when “Billie Jean” plays. However, I didn’t do that. I danced the way I wanted, because no one moves like Michael Jackson. So why should I copy? 1992 people watched this video at DailyMotion between 13-07-2008 and 23-06-2013.

7- HUMAN NATURE: I loved making my hair longer in the past. However, I started to lose my hair. Now, I clip and cut all my hair, because I am bald. This video is a document of my hair’s evolution. Before this video, you already saw different versions of my hair, such as Human Nature’s instrumental version, Kol Düğmeleri-Dallas Medley, Wanna Be Startin’ Somethin’, etc. However, you will see these screens for the first time. 161 people watched this video at DailyMotion between 22-04-2011 and 19-03-2013.

12- P.Y.T. DEMO REMIX 2008: Today is 12.07.2013. I have special web pages for Michael Jackson’s “Bad”, “Dangerous”, “This is it” and “Immortal” albums. Some of them are at Turkish part but if most of the descriptions are in English, they are at English part of my web site. The albums have special sections, because I’ve made MJ impersonatar or memory videos to all of the songs from these albums. And also I’ve made videos for all of the songs from “Number Ones” album. The only different song from the best of album was “One More Chance” and it is at my special #direngeziparkı page, so you can see the page which was dedicated to Mustafa Kemal Atatürk as “Number Ones” page. When I finish making videos for the other albums, you will be able to see them as a special web page in tst.gen.tr . I’m not in a hurry, because you know that I made my own music videos since 1996 but I wanted to dedicate a page for the most selling album of all time: “Thriller” in 2013, too. Just two songs didn’t have videos. One of them was “P.Y.T. Demo” (of course, I’ve made a video for the original P.Y.T. but the demo is very different from the song. That’s why I see them as two different songs) and the other one is “For All Time”… Today, I’ve created a video for “Pretty Young Thing”s first version’s remix made by will.i.am for Thriller 25 album. Maybe today or another day, I can make a mixed video for “For All Time”, too. This video is a Kemalist video just like my “Money” video from HIStory album and the videos in my #direngeziparkı page. I also wear V For Vendetta’s mask, because this mask became a symbolic object in Taksim Gezi Park protestations.

13- THRILLER MEGAMIX AND TAKSİM BEAT IT TRIBUTE IN ISTANBUL – TURKEY: Normally, this track is not from any “Thriller” album… This megamix is taken from the complication from “King Of Pop”s “Deluxe UK Edition”… I put my own “Thriller Megamix” version as a 13th track in my special Thriller impersonatar page, because it was 13th track of “King Of Pop”s United Kingdom version’s 3rd CD called “Rarities & Classic 12”s”… I have also “King Of Pop” album’s Turkey, Italy and Austria versions. In “The Austrian Limited Edition”, there is also Jason Nevins’ incredible remix but it is 16th track, and I can’t put it as 16th track, because “For All Time” is the 16th track in Thriller 25. Anyway, normally I copy and paste my old descriptions of my home videos, but I wanted to explain it. Now I can copy+paste my original description.

This video is a summary of my videos which are songs from Michael Jackson’s “Thriller” album. I’ve started to make home videos in 1996. I’ve acted in a short movie in 2004 and I was in “Beat It” trbiute which was done in the memorial of Michael Jackson in 2009 in Istanbul. This is not a new “TST Megamix”… This is a detached video just like “MTV 1995 Megamix”… I hope you’ll like it. 136 people watched this video at YouTube between 24.12.2010 and 12.05.2013.
In 10.10.2009, Michael Jackson fans (Turkish, German, African, etc.) made a “Beat It” Tribute in Galatasaray Square and Taksim Square… I was there, too. I wanted to make a memorial video using “Beat It” part of “Thriller Megamix” which was used in “King Of Pop” album. I wanted to show myself dancing there, because I’m proud of it… In fact, the others trained for 1 month, I joined them in the last rehearsal. That’s why I danced in the back. I also made a video for complete “Thriller Megamix” in my SFMJFan channel @YouTube (but it is closed even hundreds of people watched it), but firstly I couldn’t wait to share “Beat It” part at DailyMotion in 2009. 1801 people watched this video at DailyMotion between 29-12-2009 and 12-05-2013.

16- FOR ALL TIME: At last, in 12.07.2013 Friday, I finished to make videos for all of the songs from the most selling album of all time: “Thriller”… As I said in the description of “P.Y.T. 2008”, I make videos for “Thriller” since 1996; at the age of 15… My first full video from “Thriller” album was made in 25.05.1996 and it was “Billie Jean”…. After 17 years, my last video from “Thriller 25” album became “For All Time”… I am writing the description, today. Because I created my spacial web page for “Thriller” albums today. However, my Vimeo limit is finished for this week. I have to wait Sunday to upload my video to Vimeo. I don’t want to upload it to other video sharing sites. All of them must be in Vimeo. Maybe, people watch videos in YouTube or DailyMotion more but they delete or block my videos. Vimeo doesn’t do that at least these days. Normally I copy and paste the old descriptions but this time while uploading my “For All Time” to Vimeo, I will copy and paste the description which I wrote in www.tst.gen.tr/music/thriller.htm … My all “Thriller” videos are there… Anyway, “For All Time” is a mixed video of my old and new screens, my stuffs, my bird, etc.

P.S.: If you want to watch the full version of my performance in Carousel Shopping Center, you can click here… And you can watch all these videos from my #YouTube play list.